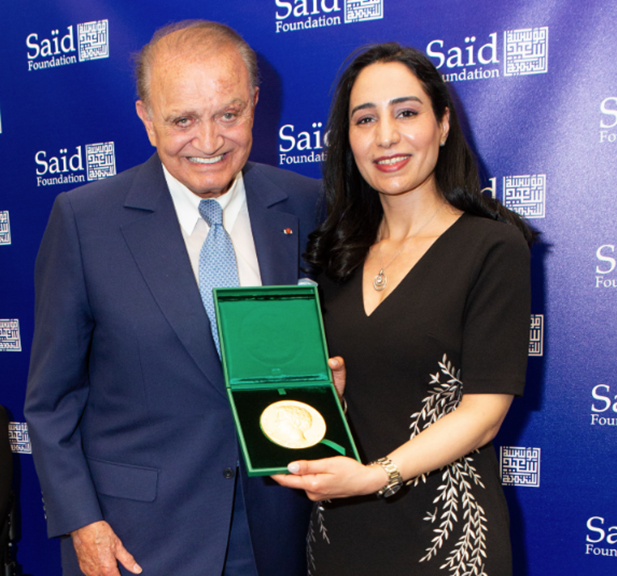 The Saïd Foundation is delighted to announce that the Palestinian/Syrian alumna Dr Kinda Alshaikhahmed has won the Foundation’s 2022 alumni achievement prize. The prize is awarded to an individual judged to have contributed significantly to the development of the Levant region and to have shown the positive impact of their studies as a Saïd Foundation Scholar.

Dr AAlshaikhahmed was supported by the Foundation to study for a master’s degree in Molecular Microbiology at the London School of Hygiene and Tropical Medicine (LSHTM) in 2010. She then completed her doctoral studies at LSHTM in 2015 where she developed a vaccine for an animal virus that has serious economic and agricultural impact on animals particularly in Palestine and Jordan. Clinical trials to investigate the efficacy and safety of the vaccine are currently being carried out in the US and the UK.

Upon completion of her PhD, Dr Alshaikhahmed worked as a Postdoctoral Scientist at the University of Oxford. She then worked as a Research Associate in Gene Therapy at UCL’s Cancer Institute, before moving to work as a Research Fellow in Molecular Virology at LSHTM. She has lectured, supervised, tutored, and mentored a number of students from LSHTM and the Saïd Foundation. Much of her work has been presented at international conferences and published in top-ranking scientific journals.

Dr Alshaikhahmed joined the multinational pharmaceutical and biotechnology company AstraZeneca as a Senior Research Scientist in March last year. Her current work is focused on developing a treatment for an inherited brain disease called Huntington’s disease which causes the brain to function improperly, resulting in uncontrolled movements, emotional problems, and cognitive impairment.

The prize announcement was made at the Foundation’s annual lunch held on 14th May and the prize medal was presented to Dr Kinda Alshaikhahmed by our Chairman Mr Wafic Saïd.

Watch this video in which Dr Alshaikhahmed talks about her remarkable scientific career and how the Saïd Foundation scholarship helped her make a significant contribution to scientific and medical research.